s98(2) of the Employment Rights Act 1996(ERA 1996) makes capability or lack of qualifications a potentially fair reason for dismissing an employee. Capability covers a range of issues including sickness, and lack of productivity. Performance management is used to steer behavior or competence to an acceptable level. If the employer believes that it is not working, then the matter is escalated to a disciplinary procedure. 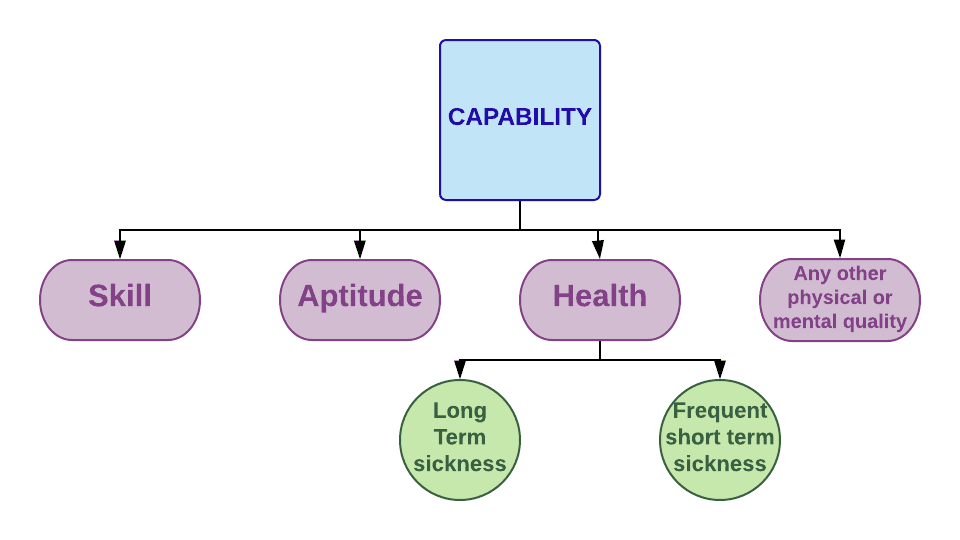 Your employer can dismiss you on these grounds if they believe that you cannot do your job to the standard required of you. This can be because you can’t work to the skill level needed for the job. It could also be because you can’t carry out the work because you are ill and your employer needs to get the work done. This means you can be dismissed because of your poor sickness record, but your employer will have to go through particular steps to do so. For a more detailed Guide see How to survive capability and performance management at work

In the case of Homer v Chief Constable of West Yorkshire Police [2012], the Supreme Court said that a requirement that employees obtain a law degree before they could be promoted to the highest grade was indirect age discrimination against Mr Homer, who did not have enough time to complete a degree before he reached the employer’s retirement age.

This means that employers must be prepared to justify having a strict requirement that an employee has to have a particular qualification in order to be promoted.

The usual process is Performance Management. This is the process of improvement after your employer identifies an issue about your capability or qualifications. Most employers have performance management policies and procedures that are used in managing issues of capability.

Performance Management is not part of discipline. If you are provided with training and support but are still unable to meet the standards, then it will become a misconduct issue for which you can be dismissed following the disciplinary process.

It is usually unfair to dismiss an employee for one instance of incompetence. But in certain circumstances, such a dismissal would be fair. An example is the case of Taylor v Alidair Ltd. [1978]. Mr Taylor landed an aircraft negligently and put the lives of passengers at risk.

The Court of Appeal said that his dismissal in this case was fair because Mr Taylor had undermined his employer’s confidence in his ability to do his job. In Retarded Children’s Aid Society Ltd v Day [1978], the Court of Appeal said that in some cases it may be reasonable to dismiss without giving the employee a second chance, particularly with a person who is to go on in his own way.

What Should You Look Out for?

In order to show that they were justified in dismissing you, your employer will have to go through the “Reasonableness Test” in s98 (4) Employment Rights Act 1996. A fair procedure would be in your employment contract or workplace disciplinary policy and procedure. If there is no disciplinary policy and procedure then you should refer to the ACAS Code of Practice on Discipline and Grievance Procedures and the accompanying Guidance.

Your Employers Duty to Act Reasonably

S98 (4) of the Employment Rights Act 1996 says that your employer must show that they acted reasonably in treating capability as a sufficient ground for dismissing you.

Your employer has to show;

What they did to ensure that you could do the job in the first place? Including evidence that they gave you;

Your employer needs to show that they followed a fair procedure before dismissing you on the ground of capability.

Your employer has to show that they;

If your employer cannot prove that they were justified in dismissing you and that they followed a fair procedure, then your dismissal will be unfair and you may be compensated by the Employment Tribunal.